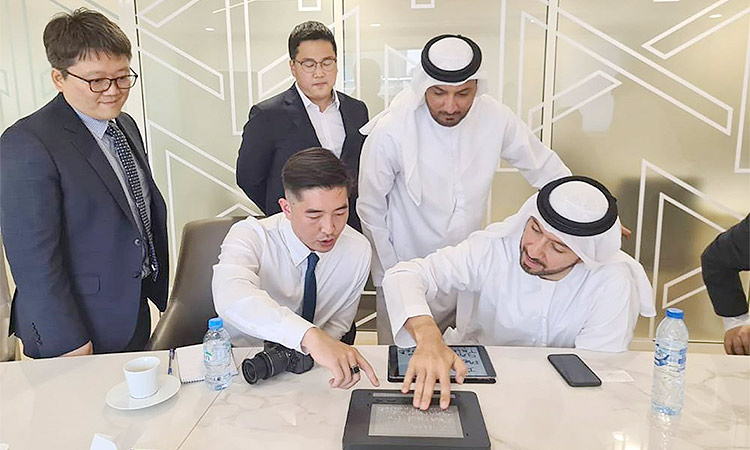 Inayat-ur-Rahman, Business EditorThe Emirati company, Taawun, which specialises in logistics and marketing management, signed a memorandum of understanding with the South Korean giant, Dot Inc., which specializes in electronics, programming and logistical services for blind and visually impaired people of determination, in Dubai, in the presence of a group of officials.Taawun company was represented during the signing ceremony by Mansour Abdul Rahman Falaknaz, CEO of the company, and Abdul Razzaq Ali Al Farsi, Vice President, and the Korean side was represented by Eric Kim, CEO of Dot Inc.  The company’s products and an exclusive focal point through which Dot Inc’s products are marketed. It is noteworthy that Inc Dot recently took a big step forward by using a smart device that not only allows displaying texts easily, but also allows visual representation of images by touch in “Braille”, which is the traditional way known, especially for the blind. And the fact that DOT is one of the leading companies in the field of smart devices, Sola has taken it upon itself to break out of the traditional framework of educating the blind by developing education systems by using the web and smart devices to make their lives easier. Codenamed Dot Pad, this device is the first of its kind with seamless integration into the Apple iOS ecosystem, and will soon be supported by other tech giants Google and Microsoft. “We got the idea from the mechanism of speakers,” Dot Inc.’s CEO Eric Kim explained.The tiny electromagnetic actuator vibrates in smartphone speakers but the team adapted it to move a pin up and down instead, using a magnetic ball rotor that locks easily in the up or down position and can unlock and disappear quickly. The whole thing is a fraction of the size of previous mechanisms — “10 times smaller compared to existing piezoelectric braille actuators.” Dot’s patented core technology is now the smallest and cheapest in the world. This is a huge leap forward in accessibility and assistive technology, an industry that generates over $50 billion in revenue annually.