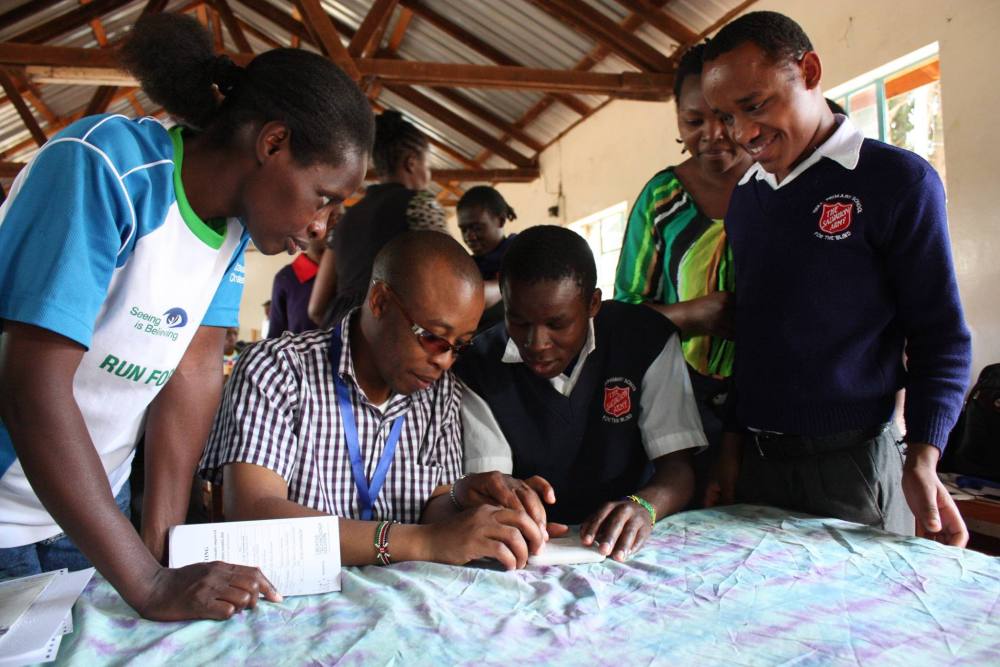 Funded by Grand Challenge Korea together with the Bill & Melinda Gates Foundation & KOICA CTS, the beginning of the Dot Mini project goes back about a year ago. Founder Eric Kim, asked, “Why do visually impaired still carry around heavy (over 2 kg) and expensive ($4000-6000) devices, when we are living in the era of iPhones?”. This probing question fueled the conception of our first product, the Dot Braille Smartwatch (Dot Watch).

From August of 2014, BBC, TIMES, and other international press began to cover our Dot Watch. It was a gamechanger – or at least that’s what people said. But even that word underestimates the true value of Dot. Breaking down the walls that the existing market had kept up over the past 20-so years, Dot’s news bombarded the market with revolutionary changes. It tore down the barrier of expensive braille assistive devices. For 2 years, the Dot Watch has been under rigorous testing, and this coming December, it is getting prepped for a world-wide launch.

With 2 months left before the launch, another question spurred, “Out of 285 million visually impaired only 10% read braille, and only 5% have expensive braille assistive devices. If this is the case, then what are the rest doing? Why don’t they learn braille?”According to WHO, Asia and Africa (India, China included) is home to almost 90% of all vision-impaired under the age of 18. Most of them have never touched a braille assistive device, let alone have a smartphone that can connect to the smartwatch. More importantly, they do not know braille and neither do they have plans to learn braille.

While some may interpret the above as personal choices, behind these disturbing statistics are mounds of underlying difficulties. Only about 0.1~2% of total books released are translated to braille, with the price about 5 times higher than print books. On top of that, braille books wear out faster because each time the dots are touched, the dots became less sharp for the next reader to feel. To be honest, even if one puts a lot of effort to learn braille, there aren’t many opportunities to practice such skill in a world where even getting hold of one braille book is difficult.

“Let’s make a low-cost module for the visually impaired in developing countries.”

“How can we make the price most affordable— maybe remove Bluetooth and touch sensor functions?”

“Is there a way to learn braille alone? To learn how to read?”

“What if homeschooling is possible so there is no need to dangerously travel afar? Put textbooks and school materials in the device…”

The CTS project made beta-testing in Kenya possible. Roughly 60-70 people joined us from Kenyatta University which accounted for majority of the testers, and Thika School for the Blind, one of the oldest elementary schools for the vision impaired. Because both were Christian schools, we used the famous hymn, Amazing Grace, to appear in braille as their fingers mingled with the Dot Mini. First there was hesitation…quickly replaced by anticipation and excitement. Soon, testers were following the lyrics with their fingertips as the music streamed through the built-in speakers.

Amazing grace, how sweet the sound / that saved a wretch like me.

I plan to write three more posts on my visit to Kenya where I encountered many different stories of visually impaired people. It will take away from stories on their lifestyles to their dreams. Throughout this chronology, I believe that you will gradually come to understand who we are and what we stand for.