[스토리] Review of The Dot, The World’s First Braille Smartwatch 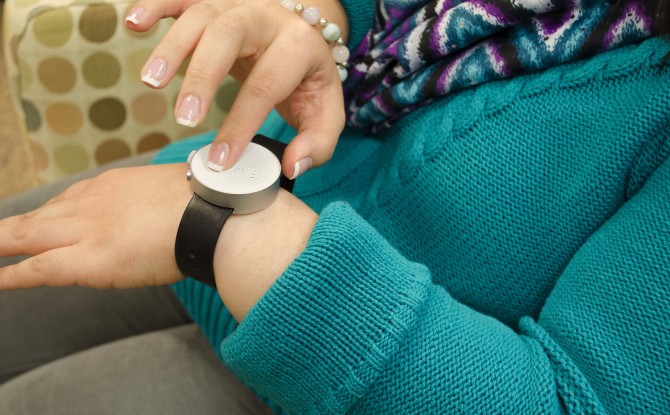 At The Chicago Lighthouse, we are constantly testing new assistive technology products. I recently had the opportunity to review the Dot Watch, the world’s first Braille smartwatch for people who are blind. Made by Dot Incorporation, a startup company in South Korea, the Dot Watch allows iPhone and Android smartphone users to receive and view notifications on the watch in Braille. Please note that the model we reviewed at The Chicago Lighthouse is a beta version, and subject to fine-tuning before the actual retail version is released.

The Dot Watch consists of a simple design. On the face of the watch is a Braille display which has four cells, and below that are two touch sensors that allow users to scroll through and read each notification. The right side of the watch has three controls: the “Select” button, the “Dot Crown” dial and the “Home” button. These controls are used to operate the watch’s different functions. The watch is charged via a USB charger which is included with the device.

The Dot Watch works by pairing it with a smartphone via Bluetooth. Users must first install the Dot Watch app, available in the iTunes and Google Play app stores. Next, they have to create an account by registering their email, name and creating a password. The watch can then be paired with the smartphone. Once paired, users can begin receiving notifications from their phone, tell the time and date, and use other features. From the app, individuals can configure the watch’s settings, check the battery status, set an alarm and use the “learn Braille” function, a feature which allows users to send a message to the watch in Braille. Aside from having a minor issue with pairing the watch to my phone (problem which was quickly resolved by technical support), the set up process and app were completely accessible on my iPhone, and I was able to do it without sighted assistance.

Once the watch is set up, it alerts users when they have received a new notification on their phone, such as a text message. They can then read it on the watch’s Braille display. The watch also alerts individuals when they get a call, and they can check caller information and answer or decline the call (note that the watch does not include speakers, so users should have their phone nearby when accepting a call). The watch also includes a stopwatch, timer and alarm. Currently, the alarm only consists of vibrations, and could be particularly handy for individuals who are deaf-blind.

For me, the main concern was how I would be able to read notifications given that the watch only displays four Braille cells – or four letters or numbers – at once. To make scrolling through notifications easier, the watch includes two touch sensors, which are activated and display the next characters when the user taps the lower part of the face. I found the touch sensors helpful, because I could easily navigate through the notifications. The watch also has an auto-scroll feature, where the next set of characters are automatically displayed while reading notifications. The auto-scroll speed can be adjusted to suit the user’s reading preference.

The Braille pins on the display are clear and easy to decipher. One issue I did have was that occasionally, some of the dots would not be raised, making for incorrect readings of time, date and notifications. After receiving some clarification from the manufacturer and further testing, I discovered that this issue was due to me putting pressure with my fingers on the display while the pins were starting to appear. To insure that the readings are accurate, users should wait about a second after pressing a command to allow the pins to display correctly.

Since the watch will be worn in all sorts of environments, it would be helpful if it included a cover to protect the Braille display from dirt or other objects that might damage it. This is something that the company is already working on developing. Also, the watch currently only includes one type of adjustable wrist strap. More options – such as bands or straps of different colors or materials should also be offered. People would appreciate these options given today’s desire for style and fashion!

The user manual was very detailed, and I was especially happy to be able to access it on the Dot Watch app and on the company’s website. The quick start guide is available in Braille, and included with the watch. While this in itself was helpful, more specific details about the watch – such as including a description of the different parts – is suggested. Contacting support for help when pairing the watch to my phone was simple and straight forward. I got a prompt response, and the support staff was able to quickly help.

The Dot smartwatch is without a doubt an innovative device for people who are blind, who will now have a new option for accessing information on their smartphones. Kudos to Dot Incorporation for their work on this watch, and a special thank you from all of us at The Chicago Lighthouse for allowing us to test and review it in our blog.