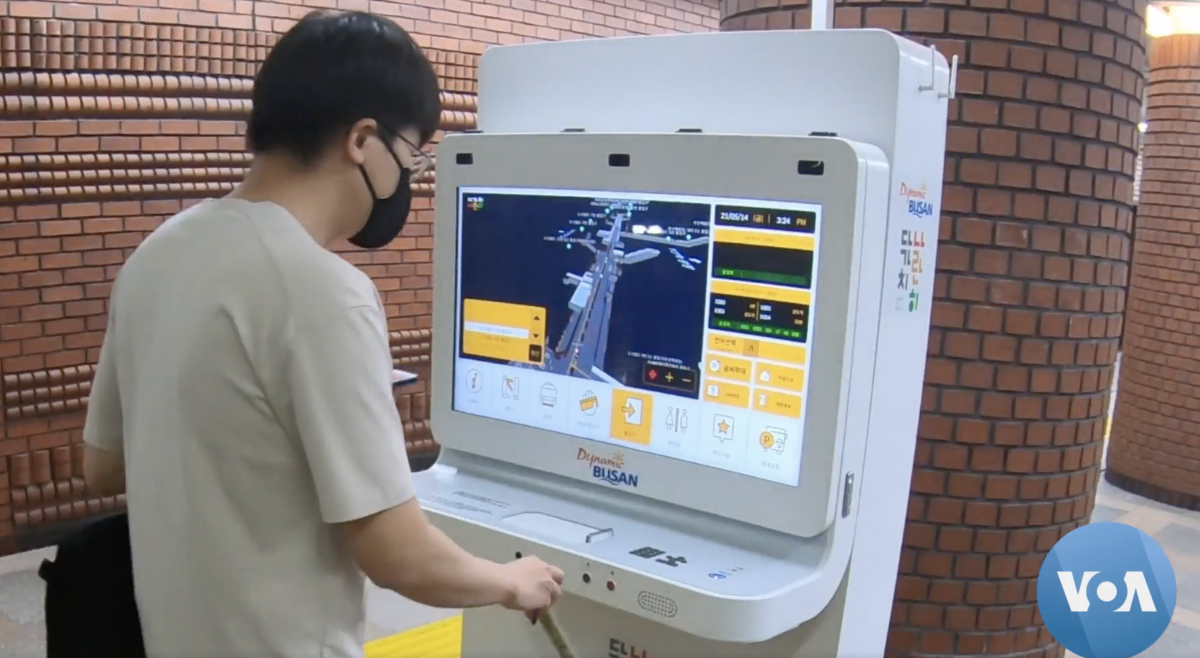 Park Hyoung-bae glides his long, white cane along a strip of raised yellow blocks that form a trail through an underground metro station. The tactile paving leads blind commuters from the street all the way to the train platform. But Park, who is walking arm in arm with his mother, says the tiles still don’t make him feel comfortable enough to travel far from his home on his own. Information boards, maps and other signage direct travelers to exits, restrooms and other station amenities, but all of these visual indicators are inaccessible for the 32-year-old.

Without help from a family member or a hired guide, he explains Busan’s metro system can be overwhelming.

“I’ve gotten lost in subway stations and asked people where I am, but sometimes they ignore me and I have no idea if they’ve walked away or not and that makes me feel isolated,” he said. “It’s hard to ask for help as someone who’s blind.”

Cities across the globe are installing new ICT, or information and communications technology, that connect public infrastructure with the electronic devices of pedestrians, drivers and commuters. And some governments are using these systems to make public spaces more accessible for people with disabilities. In Busan, a new smart city initiative could help people with a vision impairment travel more independently.

How it works
In March, Busan launched a mobility service called Dagachi Naranhi, or Side By Side, that uses GPS technology to provide localized directional information inside one of its metro stations via a smartphone app. Users select a destination within the facility, like the subway platform, elevator, or a way out, and the software sends meter by meter instructions that update in real-time as the traveler moves.

Park is trying-out the app for the first time and uses his iPhone’s Voice-Over utility to turn the directions into speech that is read out loud. He picks one of two accessible kiosks and is told to walk straight for 98-meters.

After getting used to the app’s interface, Park arrives at the machine, which receives data from Bluetooth beacons placed around the station and displays maps and other information on a large touchscreen or by voice in multiple languages.

Park, who participated in some of the pre-launch testing of this device, says what he likes most about the kiosk is its Braille touchpad, which can transform into a tactile map.

“When I select a destination, the Braille display lets me feel the layout of the station and then I can memorize where I need to go,” he said.

Plans for expansion
City officials say they hope to eventually expand Dagachi Naranhi throughout the four-line, 114-station subway network. The Busan Transportation Corporation’s Jeon Byeong-jun explains that while the smart system could improve visually impaired metro riders’ independence, the app and kiosk can also benefit an even larger swath of the city’s nearly three and a half million residents. “It’s not just for people with disabilities, it can be convenient for pregnant women and the elderly, or even foreign visitors can use it,” he told VOA. “It’s for everyone."

As cities adopt these new systems, there’s concern that smart technology could in fact raise barriers for people with physical, sensory, or intellectual impairments. Some disability advocates say that is why it is essential to create electronic devices or apps with universal design principles — so they really can be used by everyone.

Disabled people input
Go Mi-sook is a technology trainer and handles customer support for Dot, the Seoul-based firm that partnered with Busan to implement the Dagachi Naranhi program and created the accessible kiosks.

She says ever since losing her vision as a teenager, assistive technology, such as screen-reading software on her computer or phone has “empowered” her. But not every company ensures that differently abled consumers can use their products.

Roughly 250,000 South Koreans have a visual disability, according to the country’s Blind Union — a relatively small demographic in a nation of about 52 million.

One way to ensure that the needs of this minority group is considered is to bring more designers with a vision impairment to the table, Go says. “There’s a difference in how people without a disability think about making products that can be used by someone who is blind,” said the 34-year-old. “It’s important that visually impaired people be part of the planning and design process.” Inside the Busan metro station, Park Hyoung-bae and his mother await the train back to their neighborhood. He says if Dagachi Naranhi were installed in more places, he would feel greater confidence about venturing-out without assistance.

Park adds this inclusive technology does not just improve mobility. It could also reduce social barriers. “Non-disabled people don’t often see people with a disability using the subway,” Park said. “If this technology makes it easier for us to use public transportation, I think the overall all perception of people with disabilities will improve.”